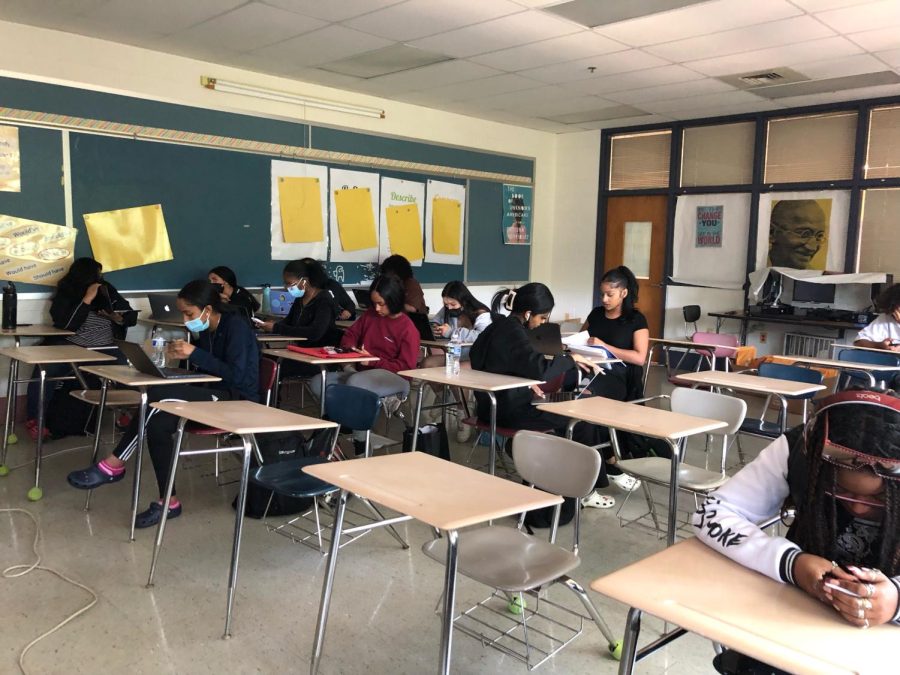 A photo of a classroom with students.

Do you remember being in school when math teachers said, “you won’t always have a calculator in your pocket.” Can you imagine a teacher saying that now? It would seem ludacris in the smart-phone age. Yet, those are also the days of “no cell phones in the classroom.” The fact is, they are a part of life now and they are not going anywhere any time soon. I think about being in staff meetings and how many of my own colleagues are distracted by their phones, and they expect kids to do better? These kids have never lived a day in a world without phones and yet we expect them to act like they have. I also think about the kind of anxiety adults get from being without their phones, and studies I’ve read about by UMD professors about the profound effect of separation anxiety that occurs when people are separated from their technology. Here’s one article on cell-phone separation anxiety amongst teens from the National Institute of Health. Considering the high anxiety teens experience from being separated from their phones, the fact that cell phones have completely infiltrated almost every aspect of human life, and the fact that I was ending each day at work frustrated and angry about cell phones, I decided that there had to be a better way.

So, I changed my approach. My new policy is that students are allowed to have their phones in my classroom. My policy is responsible cell phone usage. I find that modern students are able to appreciate the logical argument “be responsible”  as opposed to the authoritative argument “put your phone away because I’m your teacher and I know what’s best.” During the first day/week of class, we review the cell phone policy. What does it mean to be responsible with your phone? Does it mean it has to be away and out of sight? No. Does it mean you can’t answer a text message and get back to work? Well, that depends. Is the teacher giving instructions or direct teaching? Then maybe wait a few minutes for a better opportunity. But ultimately, it doesn’t take that long to respond to a text. Want to answer a Snapchat? Those of us who use Snapchat know that it takes under 30 seconds, max, so I tell kids to get it out of their system and get back to work quickly. Then I ask them what happens if they are on their phone and aren’t getting their work done. Is that responsible? They can all agree no. Should you spend 20 minutes engaged in a text message conversation? Obviously not. What if you need to make or take a phone call? I am (usually) happy to let them take it in the hallway. We discuss watching Youtube videos or other streaming services, and how that kind of engagement with a phone means completely disengaging from the classroom. I try to lead them to the conclusion that playing video games has the same result, and is therefore also inappropriate and irresponsible. Then I remind them that it is my job to help them succeed, and if the phone becomes a problem, we will absolutely discuss it; however, I will give them the respect of believing that they can be responsible with their phone until they give me reasons to suspect otherwise.

To use this system effectively, teachers have to really commit themselves to not harassing kids about phones. I suggest that teachers spend some time observing the students and how they work throughout class. In order for there to be buy-in from the students, they have to see that the teacher is not going to act like a phone police. So instead, I find ways to use cell phones for instruction. See a kid with a phone? Hey kid, can you set a timer for the next activity? Can you look up the definition of a word? Can you look up a random fact related to our lesson? The kids seem to really enjoy the timekeeper role. It also is a huge help in keeping my lessons on track. I also allow students to listen to music via headphones during any independent work time. Their music should not be loud enough for anyone to hear but them, and my students are pretty reasonable if you ask them to turn it down when it gets loud, although I am very intentional in making sure I ask them to turn it down in a non-threatening way. If they seem defensive in any way, I remind them that they’re not in trouble, and I just need them to turn down their music because it’s distracting me and/or others. Usually, they say OK without much trouble.

This week I dealt with three 10th grade boys who had completed less than 10% of their research assignment. They had three full class periods to explore the databases and take notes in an organizer. Today was day four, and their documents were blank, so I asked them each (individually, after giving directions) if they thought it would be a good idea to come sit closer to my desk today so I could make sure they got things done. They ALL agreed without much convincing. When we were settled, I asked them to put their phones on their desks where I could see them. I wasn’t taking them away, but I wanted to know that they weren’t in their hands. They ALL agreed, again without resistance. Furthermore, at the end of class, they had completed more work in a single period than they had in the previous three. They agreed at the end of class today that they had perhaps been lazy, unfocused, and distracted by their phones. The following day, they were able to work more responsibly at their own desks.

If we are ever working in groups for any reason, I take the opportunity to talk about non-verbal cues. What kind of non-verbal cues are you sending to your group mates when you sit there with your cell phone out? Are you there to participate? How does it feel to be in a group with someone who won’t participate? I make students acknowledge how much it stinks to be paired with someone who won’t engage. We talk about what group participation looks and sounds like. Then during the lesson, if I remind students to put away their phones, there’s usually no resistance. They understand how group work requires a type of interaction that is obscured by cell phones. If it becomes a recurring issue for any student, sometimes I will take their phone and keep it at my desk until the end of class. I definitely do not ignore cell phones, but I don’t jump on them, either. I see it as a need to give kids the opportunity to demonstrate that they can be responsible; otherwise, how will I ever know if they are?

Reverse psychology has always been effective on children and teenagers, and now that I’ve had this policy for five to six years, I see the difference. I don’t fight with kids about phones. I don’t immediately target the phone as the problem. Kids have always looked for reasons to be distracted. Phones make it easy. In a perfect world, they would be intrinsically motivated and inclined to complete school work. While we don’t live in a world anywhere close to perfect, a lot of our students actually can handle this kind of responsibility. This policy will allow you to instead focus your attention on the students who don’t know how to be responsible. You don’t need to enforce a cell phone policy. Enforce being responsible instead.

I recognize that the effectiveness of this policy may be a result of the relationships I have with my students. They buy-in because they see that I am genuine, but I also think that it is because of policies like this that students develop that respect for me. They see that I am willing to treat them like adults, and it makes a world of difference.