Reflections on Noises Off 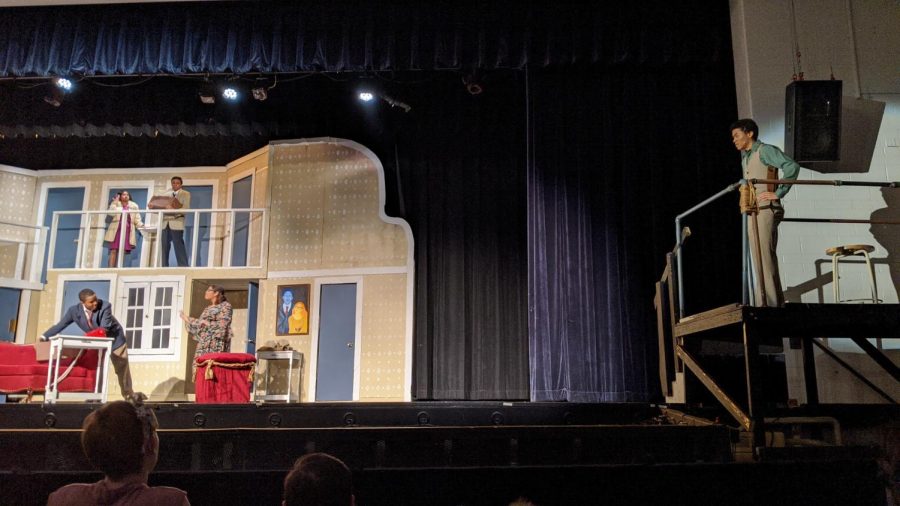 A scene from Noises Off

Judging by my own viewing as well as the lack of conversation around this topic, I can safely assume that most of you didn’t watch Noises Off. I don’t blame you. Before this year I’ve never heard of it myself. I was unsure if I was going to even see it. Especially since these shows are somewhat obscure or aren’t as well known by the general student population, as other more prominently performed shows. I’ve never harshly disliked any of the shows we do here, with a few exceptions, they just weren’t always very appealing to me. I wasn’t expecting this show to be monumental in any way

Until I saw it on December 19th, two weeks before winter break.

I’m not the type of person to review or lobby for anything, but this show proved to be my undoing. It fascinated me in more ways than one, and I wasn’t the only one, who enjoyed themselves. The audience, despite not taking up half of the auditorium made as much noise as the senior class and junior classes during the pep rallies.

Noises Off is a satirical comedy centered around the rehearsal and eventual performance of a play we never fully see. It stands out amongst the recent barrage of meta-shows due to its humor focusing on the actors and crew instead of the characters. Even Michel Ley agrees, stating that this show “compared to other shows was very interesting.” I much like the rest of the audience thought that the play within a play concept would give the actors more freedoms. As it turns out the opposite is true.

“We were very reliant on the script and we tried to stick to what was given to us as close as possible without changing anything. So getting out and making sure that the actors got down all of their specific stage movements and lines was critical for making sure that this show was as best as it could be.”

That effort paid off, resulting in this show having more of an impact on the audience than any of the other shows Springbrook has done, despite not having the notoriety of musicals such as Freaky Friday and The Little Mermaid. Noises Off is an homage to the theater and if you’ve ever worked on or seen a production, whether it was a play or musical, you’ll appreciate this show for its jabs at theater, and will relate to the characters.

Out of the nine roles in this show six of them serve multiple roles. I admit that this makes the show a bit hard to follow if you don’t pay attention to the switch between the play being put on in the show and the “main” show. This doesn’t negate any of the humor or appeal. I would actually argue that it makes the show more engaging by forcing the audience to pay closer attention to the lines being said. It also adds to the humor and gives the allusion that there are more people on stage than you actually see.

Each character depicts an archetype and meshes will with the others. Lloyd, the very temperamental director has a very business-oriented relationship with his overworked assistant stage manager. Their foils of one another, and highlight each other’s strengths and weakness.

Speaking of relationships this show also has a love triangle involving Lloyd, Brook, the inexperienced actress, with her head in the clouds, and Brook the stage manager, and the person later revealed to be bearing Lloyd’s child. Watching this love triangle play out more entertaining than I expected. The timing of each of Lloyd’s slip ups is characteristic of a romcom, only more exaggerated, highlighting the absurdity of romantic subplots.

One of the more overtly expressed messages in the show is the action of rehearsal as a “double edged sword”. Obviously rehearsal is essential to any good show and is only meant to improve an actor or musician, but that doesn’t mean it doesn’t come with consequences. For instance Brook and the elderly Selsdon greatly benefited from the rehearsals, being the only actors who weren’t completely ready, even the day before opening night. Dotty just simply didn’t pay attention, while Selsdon just didn’t show up to certain rehearsals on time if at all, but for everyone else, the rehearsals appear to impair their acting (and sanity). As the acts progress you see more and more mistakes being made to the point, where they don’t even finish their first show.

This motif nevertheless, serves as the overall comedic arch of the play, and is done very well. Each character gets more and more fed up with the others. At one point one of the actors, Gary, whose very easily agitated, chases around a fellow actor (Fredrick) on the assumption that his girlfriend and fellow actress Dotty is cheating on him with Fredrick. Brook gets in on the prop violence and stabs Lloyd with a cactus (which was meant to be a bouquet of flowers as an apology gift from him). All of this was happening on opening night, during the show.

This show is the theatrical embodiment of both unbridled fear and an overwhelming sense of accomplishment, proceeding and following any production. This the underlying appeal of Noises Off and would be reason enough to go and see it, but not everyone works in or cares about theater. What is the appeal for the rest of the school body? Humor. This show is a satire riddled with jokes that can appeal to anyone, whether they’re a die-hard theater fanatic, or have never seen a theatrical production in their life. Age isn’t a limiting factor either when it comes to comedy in this play.