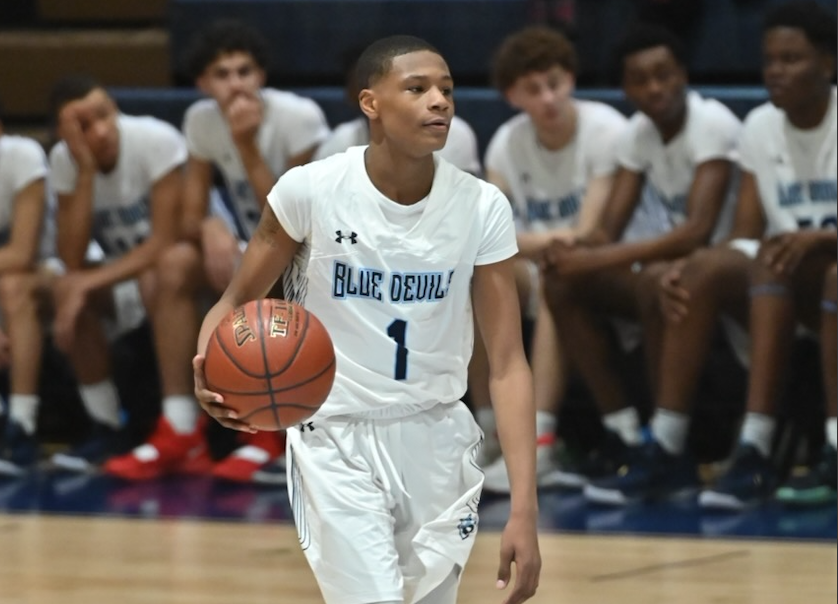 Over the course of just two years, Springbrook sophomore Amare Curtis has taken the Northeast Consortium by storm. As a starting Point Guard in his second season on the Boys Varsity Basketball team, Curtis’ impact has not gone unnoticed.

As an 8th-grader out of Forcey Christian School, Curtis began working out with the Blue Devils, coached by Darnell Meyers, during the annual Capital Hoops Summer League.

“At first my teammates did not know what to expect when an 8th grader started playing Summer League with them, but after the first game, they showed me a lot of respect,” he recalled during an interview with The Blueprint.

Within a relatively short amount of time, Curtis has embraced multiple leadership roles.

“I am responsible for controlling my team as much as possible,” Curtis said. “I am the voice between the coach and my teammates.”

Curtis currently stands at just 5 feet and 9 inches, but he doesn’t let his size get in the way of his dominance on the court. He focuses on “dominating my opponent and winning games.”

In addition to daily practices with his Springbrook team, Curtis works out with a personal trainer at least three times per week. He spends his weekends training with a former NBA player, and works out with his father in between.

Life as a student-athlete comes with its own inevitable distractions. For Curtis, social media is the biggest one. However, he credits his parents for helping him stay focused and encouraging him to maintain his academic performance. Curtis aspires to play Division 1 basketball after high school, and plans to become a physical therapist if he does not play basketball professionally.

After a 78-33 victory over Bethesda-Chevy-Chase on February 15, the Blue Devils are poised for a competitive playoff run. With the coveted #1 seed in the 4A North Region and the right to host throughout the regional final, Curtis and his team are looking to win the Maryland 4A State Championship.