The NFL’s Long History of Chokes 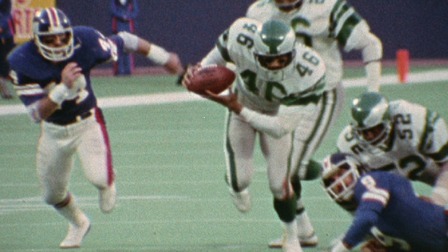 "The Miracle at the Meadowlands was a fumble recovery by cornerback Herman Edwards that he returned for a touchdown at the end of a November 19, 1978, National Football League game against the New York Giants in Giants Stadium." -WPE

We can all remember the most shocking moments in NFL history, from the trick plays and clutch game-winners to broken records. These will go down into the history books and will never be forgotten by anyone.

Of course, however, not all of these moments are the victorious glory types. There are always teams that are finding an embarrassing way to blow a game away. Those kind of moments get us to laugh at that team and call them jokes for their humiliation. Sometimes it was the coach’s lack of ability to call good plays and sometimes just players screwing up at the worst time.

As we look into NFL’s biggest choke moments that lead teams to infamy from the start to the end, of course the list doesn’t end however there is just enough to examine and enjoy.

Miracle at the Meadowlands

In 1978, the Giants were in position to win the whole game as long as they ran down the rest of the time on the game clock. Things were looking very bleak for the Eagles who were out of timeouts really late in the 4th Quarter. As the Giants were leading 17-12 it seemed simple enough, just kneel and they’d  win, right? People found it questionable when they called a running play and weren’t in a kneeling formation. The quarterback fumbled trying to handoff to the running back which resulted the ball to go bouncing to the left where it was picked up by the cornerback, Herman Edwards, to ran it back for the score and have the Eagles win 17-19. That was a lesson to all teams to make sure you simply kneel the ball. This blunder has never been repeated.

In the 1980 playoffs, it was the Raiders against the Browns. After some tough competition, the Browns were down 12-14 late in the 4th Quarter. Fortunately, the Browns were in Raider territory and were in position to score a game-winning field goal. For some reason, instead of taking the field goal, the coach decided to pull a play called “Red Right 88,” a passing play designed to go into the endzone.  The quarterback threw a deep ball into the endzone to get picked off and lose the game. The Raiders would go on to win the Super Bowl that year.

In Super Bowl 25, it all came down to this one play. The Bills were down 19-20 against the Giants. With just a few seconds on the clock in the 4th Quarter Scott Norwood was ready to kick a 47-yard game-winning field goal. Bummer, he pulled it wide right. The Giants ran out the clock and won the game. Yes, kicking isn’t that easy, but to miss a kick at that place and at that time was just heartbreaking.

In the 1992 AFC Wildcard Game, the Bills started the game terribly as they couldn’t stop the Oilers. The halftime score was 28-3 and when the 3rd Quarter started the Oilers got a pick six to make the game 35-3. The game was over, right? I never thought it would be physically possible to blow 30+ points in a single game, well, I was wrong. Unbelievably, the Oilers blew their entire lead. Allowing the Bills to convert several 4th and 3rd down conversations during the 3rd and 4th Quarter. The score was 38-35, although the Oilers kicked a field goal to send it to OT only to throw an interception and give up a field goal. Bills won 41-38. It’s even more sad when you realize that the Bills had a backup quarterback playing.

You think missing a kick and losing a Super Bowl is bad enough? How about going to 4 straight super bowls and losing all of them? That’s right. The Bills went to Super Bowl 25, 26, 27, and 28 only to be named losers in all of them. It was almost as if Norwood missing that kick cursed the Bills because they got blown out in every other Super Bowl after 25. After 28, the Bills didn’t have it in them to go to another Super Bowl, which isn’t shocking since they felt like they couldn’t win the next one after coming short of the Lombardi Trophy 4 times in a row.

In arguably one of the most exciting conference games in NFL history, it came down to one kick. Vikings were up 27-20 against the Falcons. The Vikings were in Falcon territory and were about to settle with a field goal to make it a two-score game which would have likely iced and sealed the win for the Vikings considering it was inside 2 minutes. Gary Anderson never missed a single field goal the entire season so everyone thought he would easily make that kick. He missed it wide left. That one moment when his team needed him the most and he choked. Not only that, but the defense couldn’t stop the Falcons offense during their 2-minute drive thus resulting into a game-tying touchdown that led to overtime. The Falcons would go on to kick a field goal to win the game 30-27.

In week 16 of the 2003 NFL season, the New Orleans Saints were playing against the Jaguars. The Saints were at 7-7 and needed a win to keep their playoff hopes alive. On the last play of the game the Saints made one of the biggest miracle plays in the NFL history to easily be forgotten. At their own 25-yard line Saints quarterback, Aaron Brooks, threw the ball to an open receiver who lateraled it to another Saints player who also lateraled it to another teammate to finally lateral it to a wide open Jerome Pathon who ran the football to the end zone to make the score 19-20. An absolute amazing play to keep the season alive, now all they needed to do was have John Carney kick an easy extra point to send that game into overtime. Wide right. And there goes the Saints season, pulling one of the greatest NFL plays just to miss the extra point and lose. Ouch.

To finish a NFL season undefeated and go to the Super Bowl is quite impressive. Not to mention, the Patriots were playing against a wildcard team who did not have a decent offense, the Patriots had one of the best offenses in NFL history as they scored 589 points and had veteran quarterback and receiver, Tom Brady and Randy Moss, who both broke records that 2007 season. Coming into the Super Bowl 18-0, everyone predicted the Patriots to obliterate the Giants. Well, the undefeated Patriots scored only 14 points and let one of the greatest Super Bowl catches happen that could have been easily avoided. Therefore, losing the game, 17-14, and could not repeat what the 1972 Miami Dolphins did. Super Bowl 42 would go down as one of the biggest upsets ever in sports.

The misery doesn’t end for the Vikings. In the 2009 NFC Championship Game between the Saints and Vikings, the game was tied 28-28 in the final seconds in the 4th Quarter. The Vikings were just barely in field goal range though it did seem it was just close enough for a suitable field goal as they could kick a 56-yard game-winning field goal, unfortunately Brett Favre had other ideas. To just try and get a little bit closer to the goal post Brett Favre dropped back for a pass. He then ran to his right and threw across field(To those who play quarterback you should know you should never throw across your body) where it got picked off by corner-back, Tracy Porter. And just like that the game went to overtime. The Saints would get the ball and kick a field goal to go to the Super Bowl.

In an exciting Super Bowl between the Seahawks and Patriots, it came down to the wire. The Seahawks were down 24-28 with half of a minute left in the game, however after a memorable circus catch by Jermaine Kearse and short run by Marshawn Lynch took Seattle to the Patriots 1-yard line. Pretty much the easiest thing ever was to hand the ball back to beastmode who is arguably the greatest goal line running back to ever play this game. Yeah, at the one, simple enough, just hand-off to win the game. Pete Carroll (Seahawks Head Coach) for whatever reason felt it would be better to pass the ball instead of running it. And just like that the ball got intercepted at the goal line, Patriots would go on to win it 28-24.

Blowing a 32-point lead may be worse than 25 points, but the thing is the Falcons blew their lead in a Super Bowl and with the internet around. The Falcons were leading 28-3 with 17 minutes left in the game. They only built that lead to give 25 unanswered points and send the first Super Bowl ever to go into OT. The Patriots got the ball first and smoothly took it to the end zone to win it. The Falcons would never hear the last of Super Bowl 51, because with the internet around you can find several memes and jokes about the Falcons blowing that game away. Ever since then, the Falcons have always found it difficult to hold a halftime lead, I guess we should call them “Choke-a-Holics.”

Marcus Williams Missed the Easiest Tackle of His Life

In the 2017 NFC Divisional Round, The Vikings were looking for some way to keep their season alive with a couple seconds left in the game. After blowing their 17-point lead against the Saints and having an exotic battle in the final 3 minutes of the game it seemed the Saints were going to the Championship Game against the Eagles. With 10 seconds left it seemed to be true, until that last play happened. Vikings quarterback, Case Keenum, threw a deep ball to wide receiver, Stefon Diggs, who caught it and could have been easily been tackled by Saints rookie cornerback, Marcus Williams, if he didn’t attack him so early. Not only he missed the easy tackle, he cartwheeled to his own teammate who was most likely the last Saints player to have a chance to tackle Diggs. Just like that, Diggs was gone to win the game for the Vikings with no time left. The Vikings had no timeouts too, so if Williams tackled Diggs in-bounds, the game was most likely over. Sure he was trying to avoid a possible penalty that would’ve helped the Vikings, but he made an ever dumber move that cost his team the season. Marcus Williams committed one of the worst defensive plays in NFL history.

But after all, it was a “Rookie Mistake.”