Trump administration to force 200,000 Salvadorans out of the U.S. 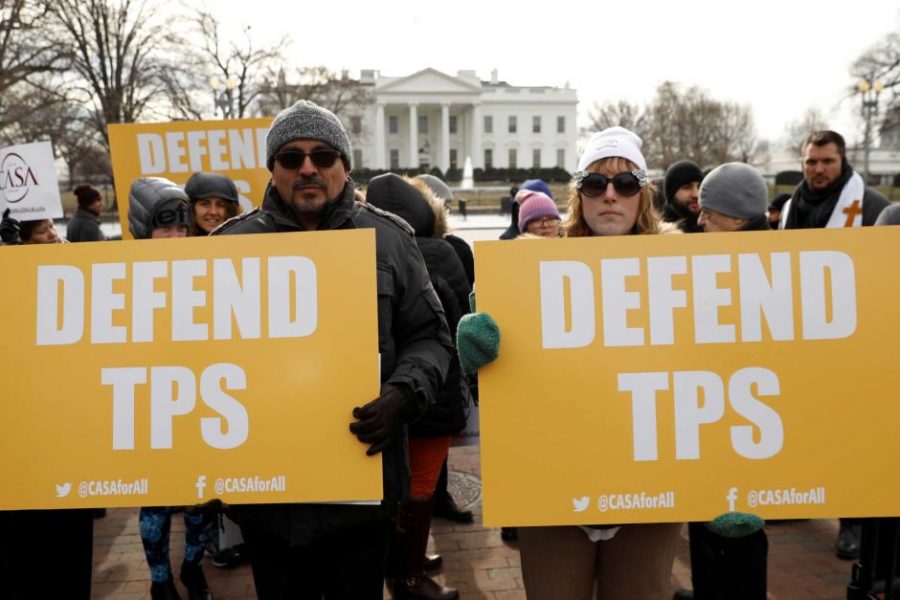 Early on in his campaign, then-candidate Donald Trump had made the repeated promise that he, along with his administration, would work to reduce the number of immigrants in the United States, claiming that immigrants are depriving Americans of their jobs. This has stemmed from Trump’s infamous rhetoric on immigration, which continues to be a key component of his administration. According to the Department of Justice, Trump has already ordered the deportation of about 50,000 undocumented immigrants during his time in office. Many families are being broken apart and being ordered to go back to the ghastly conditions of their native country. Thousands of children in the United States who are legally born citizens have at least one undocumented parent, and when those parents are deported for whatever reason, they are forced to either leave their child in the U.S. with another adult, take the risk of entering them into the infamous foster care system, take the child with them back to an unknown “home” that is always an unfamiliar place for such children.

On January 8th, 2018, the Trump administration announced the end of the Temporary Protective Status program (TPS) for Salvadorans. In January of 2001, a 7.7-magnitude earthquake struck El Salvador and caused devastating living conditions. The following month, the nation was struck with two more earthquakes, which made matters even worse. At that point, The U.S. government  decided that any Salvadoran immigrant who had been living in the United States since mid-February of 2001 would be allowed to apply for the TPS. Currently, there are approximately 200,000 Salvadoran TPS holders who are facing the threat of losing their eligibility to work legally in the United States following the decision by the Trump administration to end this protection.

The Department of Homeland Security decided that because the “original conditions caused by the 2001 earthquakes no longer exist”, there is no reason for Salvadorans to not be able to return back to their country of origin safely. DHS Secretary Kirstjen M. Nielsen said that, in order to ensure “an orderly transition”, the agency will be giving Salvadorans an extra eighteen months to return to El Salvador before danger of deportation. During these eighteen months, TPS holders are expected to apply for another legal status that would allow them to work and live in the United States legally, or go back to El Salvador. Otherwise, if they decide to continue living here past September 9th, 2019, they will be risking deportation.

The nation of El Salvador recently moved it’s consul to Silver Spring, Maryland, making our city the “home base” for TPS holders. Here in Montgomery County, there are about 18,000 current TPS holders, who collectively have around 17,100 children, according to Montgomery County Council Statistics. In the same report, it was stated that without Salvadoran TPS holders, losses of state GDP would accumulate to around $1.1 billion.

What Trump’s administration is trying to achieve, is to reduce the amount of immigrants here in America on a broad scale. In a perfect world for them, this would mean that the 200,000 Salvadoran ex-TPS holders would migrate back to their countries of origin. Unfortunately for Trump and his DHS, they would be lucky if even a third of Salvadoran TPS holders would leave voluntarily. In this case,the remaining will either have to find another legal status to remain in the United States, or face deportation. It would cost taxpayers approximately $3.1 billion to deport Salvadoran, Honduran, and Haitian who are being revoked the TPS rights.

President Trump and his administration should consider the terrible conditions that all of these Salvadorans would face upon returning to El Salvador Crime has accumulated in recent years. According to InSight Crime, September of 2017 was the most violent month of the year for El Salvador. The nation saw before them an average of 27 homicides per day during the last 10 days of the month.  Since the devastating earthquake in 2001, El Salvador’s crime rates have spiked significantly, making it one of the most dangerous countries in the world. According to a Central University of America poll from 2016, an astounding 24.5% of Salvadorans were victims of crime in 2015, as the nation surpasses Mexico in crime rates.

Gangs are also taking over many urban areas of the country, becoming a major concern for Salvadorans who may be forced to return. Two of the most well known gangs in El Salvador are MS-13 and Barrio 18. Sarah Schmalbruch, a writer for Independent, ranked El Salvador as number three on “The 20 most dangerous countries in the world” (as many other articles and lists have). Schmalbruch wrote in her article  that El Salvador has “some of the world’s highest homicide levels”, as well as its reputation for having such gang violence that “includes everything from extortion to arms and drug trafficking”.

The Department of Homeland Security’s decision to remove TPS protection for Salvadoran immigrants – a decision that was backed by the Trump administration – has made it very difficult for these Salvadorans to find a place to go. Many will have to go through the long process of applying for residency/citizenship, while others will have to sell their homes and pack their bags to go to a country that is currently in deplorable conditions. In the end, some are just hoping that something, anything will happen during these eighteen months that may change the DHS’ views and will possibly re-evaluate their decision. Most are just hoping for an extension and better possibilities at gaining a more permanent legal status.