NBA Top 10 moments in the season 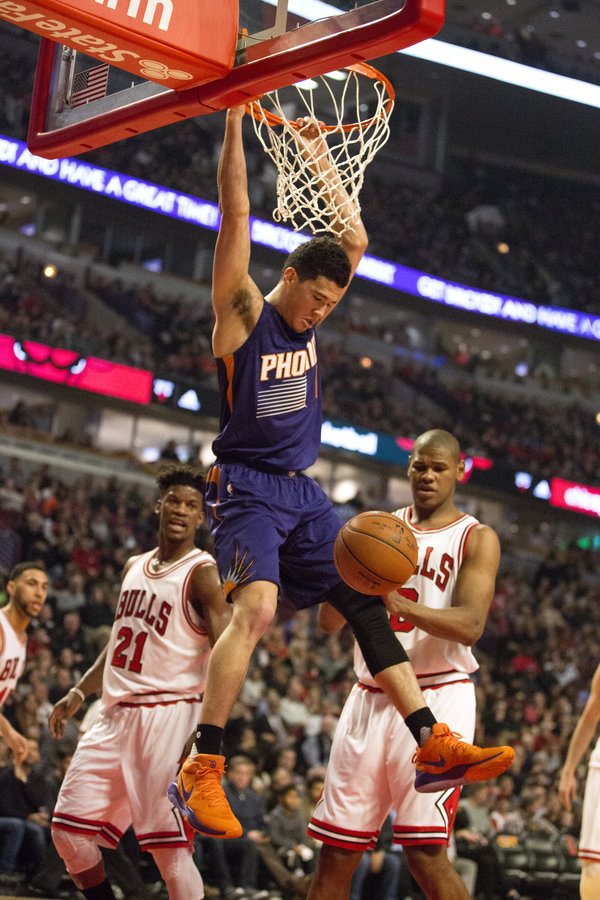 The Phoenix Suns' Devin Booker (1) hangs from the basket after dunking against the Chicago Bulls on Friday, Feb. 24, 2017, at the United Center in Chicago. (Erin Hooley/Chicago Tribune/TNS)

When the 2016-17 NBA season started, we all pictured one boring and narrow season with a similar ending; a Cleveland Cavaliers and Golden State Warriors championship rematch.

Well, boy were we wrong!

This NBA season was filled with backboard rattling, record breaking, ankle taking, commentator shocking, seat shaking, jaw dropping and eye opening moments. From the Spurs obliterating the Warriors on the first night to Dion Waiters buzzer beater vs. Warriors to Devin Booker scoring 70 points in a game to Dirk hitting 30,000 points in Dallas to Westbrook passing Oscar Robertson for most triple doubles in a season.

As the first round of the playoffs are currently coming to a close, It’s a great time to look at the top 10 moments of the 2016-2017 NBA regular season.

10. Wizards dress up for the Celtics ¨funeral¨ and deliver
This season the NBA was filled with a lot of entertaining beef between players and coaches to all the way up to the front office. One of the funniest and most disrespectful moments occurred when the Washington Wizards wore black in respect for the ¨funeral¨ of the Celtics. After an altercation between all-star point guard John Wall and Celtics forward Jamison Crowder in the two teams first matchup the east coast rivalry was reignited. After showing up in all black for the matchup between the two, the Wizards shot 58% from the field and 45% from beyond the arc and led throughout the whole game on their way to a 15 point game. This game was their 14th straight win at the Verizon Center and the fans didn’t disappoint either as the Verizon Center sold out and was rocking all night. The nail to the coffin was John Wall’s 4th quarter left handed and 1 slam on Kelly Olynyk that had the home crowd roaring and sent the Celtics into a state of frustration.

9. Kristaps one handed block vs. Nets
It’s been awhile since we’ve seen either New York basketball team at an exceptional level. The last time either of these teams made a playoff appearance and win a series was 5 years ago. In a contest between the two in Brooklyn, early in the 4th quarter young superstar Kristaps Porzingis denied Nets guard Spencer Dinwiddie with just one hand. Not only blocking it but palming it and ending the Nets drive. What made it even more impressive was the fact that it seemed so effortless on his part as he quickly ignites the Knicks fastbreak.

8. Kyrie Irving drills game winner vs. Warriors
On christmas day millions of people in this country all have one common reason for excitement, hoping they find presents under their trees. This christmas NBA fans had one more reason to be excited for, a finals rematch between the Cavaliers and the Warriors. In this extremely thrilling matchup, Kyrie & Lebron helped mount a 4th comeback after facing a 17 point deficit. With 37 seconds left Kyrie Irving was able to speed through the defense and cut the lead to just 1 point. And after a shot clock violation on the Warriors, with 7 seconds left in regulation the Cavs needed a hero. Who knew it’d be the same player that’d break dub nation’s hearts? Well, it’s safe to say we all did. Kyrie Irving was able to somehow create enough space to shoot over the defending 6’4 Klay Thompson who looked like had Irving locked down. But we know now not to ever doubt Mr. Clutch.

7. Russell Westbrook’s game winning dunk on Clint Capela
The two MVP candidates James Harden and Russell Westbrook met four times in the regular season. In the first meeting between the Rockets and Thunder, the Thunder held a comfortable three point lead with 7 seconds left. So after the inbound what would we expect them to do? Dribble it out, right? Well, we were wrong. With an inbound pass from guard Alex Abrines, Westbrook then, unnecessarily, with all his momentum blasts off the ground and elevates in mid aid and as if he wasn’t already fighting gravity, switches to his left hand and throws down a monstrous dunk on center Clint Capela. Words do the dunk no justice so I’ll let you take a look for yourself.

6. Serge Ibaka vs. Robin Lopez
Now, in no way am I trying to encourage violence but man was this beef crazy! Nowadays we don’t see fight in the NBA as often as the past generation did on sometimes a weekly basis. After a Jimmy Butler three to extend the Bulls lead over the Raptors to 16 Lopez got pushed on to Ibaka and now Ibaka being the physical once dominant player he is he responded by shoving him off of him and Lopez did not take that lightly. After a brief exchange of words, both players each threw a punch but missed, they were quickly separated. Although it was a brief exchange, it was fun to see the passion, intensity and toughness out of these two tough players. The Raptors did go on to come back and win in OT.

5. Dion Waiters hits a game winner vs. Warriors
Dion Waiters has bounced around on a couple of different teams the past two seasons, but it looks like he now has a new home in Miami. In the final matchup between the Heat and the Warriors, after a Kevin Durant dunk tying the game at 102-102, the Heat had 11 seconds to win the game. With no timeouts left, they had no choice but to inbound it and hope for someone to play hero ball. And that hero turned out to be Waiters. Taking the inbound pass, he dribbled down the court slowly but confidently and after a couple dribbles on defender Klay Thompson, he put up the shot and drilled it. Waiters finished the night with 33 total points.

4. Lebron James game tying bank shot off balance bank shot three vs. Wizards
The Cleveland Cavaliers vs. Washington Wizards took part in what was one of the best games of the season. In what was a very high scoring game, both teams shot extremely well as they both shot over 50% in the game and over 40% from beyond the arc. With just 3.4 seconds left on the clock with the Wizards up by three, Kevin Love threw an inbound pass all the way across the court to James giving him enough time to throw up a wild shot over Bradley Beal. Many thought of the shot as nothing more than just a prayer by Lebron but incredibly, he was able to hit the shot off the backboard while falling back onto the Wizards bench. Sending the game into overtime. The Cavaliers were able to then pull off a 140-135 win in overtime.

3. Russell Westbrook passes Oscar Robertson’s record for most triple doubles in a season(42)

Well, not much to say. #MVP

2. Dirk Nowitzki hits 30,000 career points in Dallas
If we know one thing about Dallas sports fans, it’s that they love their players. From Romo to Prescott to Elliott to 13 time all star Dirk Nowitzki. The love that the fans in Dallas have for Nowitzki is simply indescribable. After trading for him with the Bucks in the 1998 NBA draft, Nowitzki has been a loyal maverick, spending his whole 19 year career in the NBA. He led them to 15 playoff appearances, two NBA finals, winning in 2011. Nowitzki redefined the rhetoric for 7 foot European players in the NBA. He became the first European to win the MVP award in 2007. He hit another milestone in hs hall of fame career this March in Dallas. Nowitzki hit 30,000 career points in the most Dirk Nowitzki way possible, a fade away jumper that made American Airlines go berzerk. Knowing the significance and showing the love, Mavericks owner Mark Cuban showed a sign of appreciation and love for Nowitzki during the team’s timeout going to hug and congratulate him. Nowitzki finished the night with 25 points and finished the season with 30,260 total career points.

The Phoenix Suns didn’t have much going for them this season. They finished the season last in the Western conference with a 24-58 record, 2nd worst record in the league. Second year guard Devin Booker was the team’s only hope for success. In a matchup against the Celtics, Devin Booker went off to set not only a career high but an NBA record as well. Devin Booker scored 70 points shooting 52.5% from the field, 36% from range and 92% from the line. Booker left a trail of broken records that night, he set a franchise record for the Suns in a game, he scored the most points ever against the Boston Celtics in a game, he became the youngest player to score 60+ points in a game and the most points scored by a player since Kobe Bryant’s 81 point performance in 2002. Although the Suns did go on to lose the game 130-120, this was still a special moment for the team and the young star. We know that confidence is the biggest and single most important factor in a young athlete’s career and it was interesting to see Booker’s confidence as he took 51 shots that night. This game not only helped him get his 2k rating up but also will help develop into a more complete, comfortable and confident player as his transition completes.