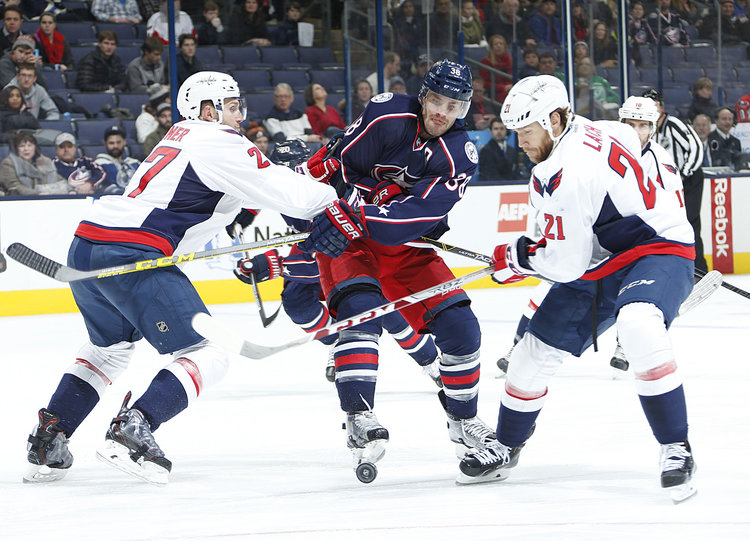 The Columbus Blue Jackets' Boone Jenner (38) is sandwiched by the Washington Capitals' Karl Alzner (27) and Brooks Laich (21) in the third period at Nationwide Arena.

After a long and tiring series against the young and quick, wild card seeded Toronto Maple Leafs, Washington Capitals are successfully returning to the District for the next round of Stanley Cup Playoffs. The President’s Trophy winners beat the Leafs in six games, 4-2, with five of the games going into overtime.

The series began on April 13th at the Verizon Center with an overtime victory by the Capitals. Tom Wilson, a native Torontonian, scored the 3-2 game winner with an incredible snipe to the top left corner of the goal, five minutes into the period.

Two days later, the Maple Leafs tied the series with a double overtime victory, winning 4-3. The hero in this game was the 20 year old Finnish player, Kasperi Kapanen, who scored one goal in the 2nd period, and then another to win the game. After the two games in D.C., the series was tied 1-1. Now, the series would go to Toronto for the next two games.

The Maple Leafs won Game 3 as well, with another overtime victory. Tyler Bozak won the game on the power play with a tip-in goal, less than two minutes into the period. This goal put Toronto in command of the series, with a 2-1 lead.

Washington, however, finally won 5-4 in Game 4, in the only game of the series that didn’t go into overtime. This victory set the course for the next two games, as the Capitals won both and surged them into the second round.

Now back at Verizon Center, the home-ice advantage helped in the Caps 2-1 overtime victory. One minute and four seconds into OT, off a brilliant assist by Evgeny Kuznetsov, Justin Williams, otherwise knows as “Mr. Game 7,” scored a one-timer right through the five-hole of Frederik Andersen, and gave the Caps a 3-2 series lead.

Finally in Game 6, at Air Canada Centre, the Capitals won 2-1 in yet another thrilling overtime period to win the series. The Swedish native, Marcus Johansson, scored both goals for the Capitals – one in the 3rd period to tie the game up at 1-1, and then in overtime to give the Caps the series.

The Capitals will play their arch nemesis and reigning Stanley Cup Champions, the Pittsburgh Penguins. This is raising many heads as they beat the Caps in the playoffs last year. The first game of the series will be on Thursday, April 27th at 7:30 pm, in D.C. To win this upcoming series, the Capitals will have to give everything they have and hope that a repeat of last year is not in store for them this time around. The fans are ready and hope that The Boys are, too.